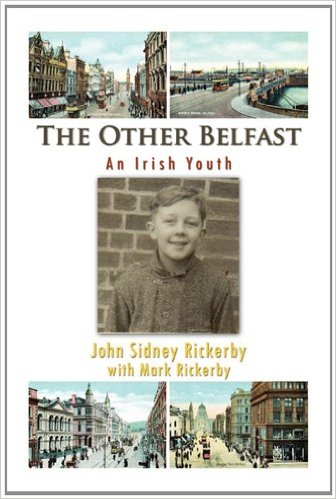 Six years ago, I helped my father finish his memoir, The Other Belfast. He had written it a chapter at a time over thirty years, maybe even forty, but he never finished it because, as he put it “I always wanted to write my life story but I thought, who’s gonna care about me? I’m not a movie star, former President, astronaut, former POW, or anyone else particularly special. Who am I to write an autobiography?”

Then he said something that is memory treasure to me now that he’s gone. He said, “But as I read it, I realized that my life was extraordinary in its own way. You gave me that.”

Wow. For a man who wasn’t exactly free and easy with praise for most of my life, that was BIG.

Maybe it’s a case of the apple not falling too far from the tree, but that’s pretty much the same reason I never started a blog. I’m in eight Chicken Soup for the Soul books and a few others, some magazines, I released a music CD that became a bestseller on the Indie circuit, and I wrote the first six one-hour episodes of a TV show, but nobody really knows who I am. So becoming a blogger just seemed like a waste of time.

Then I had my first child, long after my parents and everyone else had given up on me ever settling down. I now have two daughters – 4 years and 18 months old respectively. Nailing down what one truly believes becomes a lot more important when there are children in the picture. So does establishing a legacy. As the saying goes, tomorrow isn’t guaranteed to anyone, so that’s my first good reason to start a blog –

The second reason is to make new friends. I like having friends. I had a solitary chilidhood, which I’m sure I’ll also explore in this blog, so friends are good.

The third reason is to take you, the reader (and hopefully subscriber) along with me as I enter the world of parenting and leave behind the world of bachelorhood. Every day is full of discoveries as I see this old world anew through their eyes.

I will be writing mainly about childhood, my daughters’ and the ancient history of mine, but only as it relates to theirs. Making sure they get through this world as happily and successfully as possible is more important to me than anything else now. That may be the most important reason for a man to get married and have children – to avoid spending his entire life on a narcissistic trip only to die alone in a room full of dusty trophies and no one to share them with. Unhappiness is not caused by a lack of love, it is caused by a lack of loving. My many years of “the bachelor life” proved that to me.

The two greatest things any of us can do is welcome new life to the world, and help people die. I lived with my father at the hospital during the last three weeks of his life and will always be glad that I did. There were old people in other rooms of the ICU nobody ever came to visit. I can’t imagine going out alone after so many years on earth.

Like most things in life – marriage, fatherhood, road trips, or anything anyone has ever written or created – I’m sure the reasons for starting a blog will reveal themselves as I go along. Like life itself, it’s a serendipitous adventure. Thanks for joining me, new friend. I’ll do my best not to disappoint.