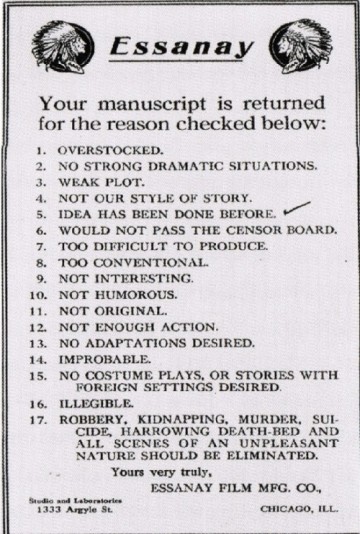 Okay, I don’t “love” love it, but I have come to accept and even be a little bit proud of it, in terms of my chosen career – writing. As anyone in the arts – particularly acting and writing – knows, you’re going to hear “no, thanks” a lot. Or the classic, “Don’t call us, we’ll call you.” Or the dreaded, “Don’t quit your day job.” But a writer’s rejection is usually silent – a polite email that reads something like this.

“Thank you very much for submitting your material to us. Our agents have now had a chance to look at it and we are sorry to say we don’t feel that we can offer you representation. Because of the high volume of submissions we receive, unfortunately we are not able to give you more detailed feedback than this. However, these things are very subjective and someone else may well feel differently about your work.

Thank you again for letting us take a look at your material, and we wish you the best of luck in finding an agent and publisher.”

Isn’t that the nicest no you ever heard? The literary world is a polite one.

Of course, I don’t like receiving rejection letters. I’d much rather receive nothing but yes’s and have agents and publishers fighting with each other to represent my work, but I don’t really mind no’s.

So why am I so proud of rejection?

Because 98% of humanity doesn’t even try. Many have artistic inclinations and leanings – singing in the shower, drawing, playing an instrument a little, jotting down a line or two now and then – but they don’t pursue that side of themselves. There are good reasons – working hard to provide a good environment for children, for instance – and there are bad reasons – self-doubt, fear of failure, shyness, etc.

Someone once wrote, “We recognize in every work of genius our own discarded thoughts.” Plenty of people have ideas and think, “Wow! That would make a great book/poem/movie/song/painting/invention.” They’re full of fire and passion for a little while. They tell all their friends about it. A few go out and buy a “how to” book so they can learn everything about it before they actually start working. (Which is a big mistake – as Dan Millman wrote, “You don’t need to know everything about the ocean to swim in it.”)

Even fewer actually put pen to paper, or paint to canvas. But the vast majority do none of those things. They get the ego stroke from their friends and family telling them how brilliant their idea is, and that’s good enough. Or worse, some significant other tells them they’ll never make it – to be realistic – to get a good, steady job – that making it in the arts is like winning the lottery – and they let that person’s lack of belief prevent them from trying. But that nagging feeling remains – the question from that other voice – the one that knows greatness lies within – the one that asks, “Why aren’t you at least trying?”

The English writer Sydney Smith (1771-1845) wrote, “A great deal of talent is lost to the world for want of a little courage. Every day sends to their graves obscure men whose timidity prevented them from making a first effort.”

So that’s why I have made rejection my friend. The same goes for confusion. They are both necessary doorways to a better place. To continue moving toward that glorious dream – whatever it is – artists must embrace confusion (the portal to higher knowledge) and rejection (the proof that they’re trying hard.) The alternative is being crushed by every rejection and giving up. That’s not an option.

An even higher step is to ask people who rejected a work what they didn’t like about it, learn from that, and work hard not to repeat that mistake. There are very few spectacles in this world sadder than someone who just doesn’t have the talent to make it as an artist, yet constantly struggling to convince themselves that they do, blind to how much they don’t know, and unwilling to put in the hours of time and effort required to educate themselves properly. Of course, everyone wants to have great accomplishments without working, but that’s not how it works. Someone once wrote, “Success is often hard to recognize because it’s wearing dirty overalls.” The only place where success comes before work is the dictionary.

Clint Eastwood was told by an agent, “You’ll never make it. You’re too tall, you squint too much, and your voice is too soft.”

Harrison Ford was told by a director, “You’ll never make it. I’ve been around and I know star quality, and you don’t have it.”

J.K. Rowling’s first Harry Potter book was rejected dozens of times. She was even advised by one agent to take a writing course!

When he submitted the now legendary book Moby Dick to an agent, Herman Melville was asked, “Does it have to be a whale?” (It did.)

Rudyard Kipling was told in a rejection letter, “I’m sorry, Mr. Kipling, but you just don’t know how to use the English language.”

So, you see, rejection isn’t even rejection most of the time – it’s just someone who doesn’t have the ability to recognize talent and should probably be doing something else for a living. Or it’s just that their agency has too many books like that already and doesn’t need another one. Or your submission landed in that agent’s email box when they were annoyed or preoccupied about something else. It’s not always about your work, and all you need to catapult you to that next level is one yes.

Sorry to get all Tony Robbins on you, but I received a rejection letter today and needed to remind myself why it doesn’t matter. I’ll still keep on doing what God put me here to do. I’ll still write even if nobody ever reads it. I’ll still devote my short life to something that inspires me and makes my heart beat faster and stronger. I’ll still do what I love. So that when I’m 95 and sitting by the fire, whether or not I reach the loftiest heights of my chosen path, I won’t have the regret of thinking I didn’t try hard enough, which is far worse and harder to live (and die) with than rejection.

Here’s a collection of rejection letters famous authors have received for now classic books. (And a few parodies.) Enjoy! 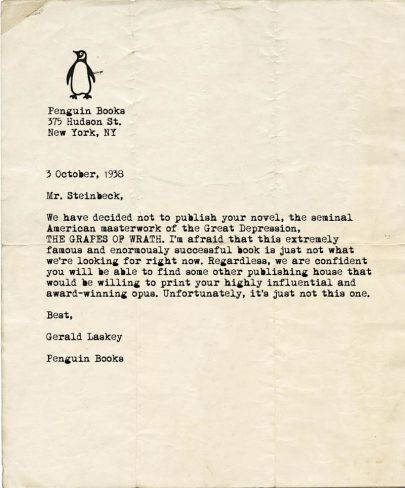 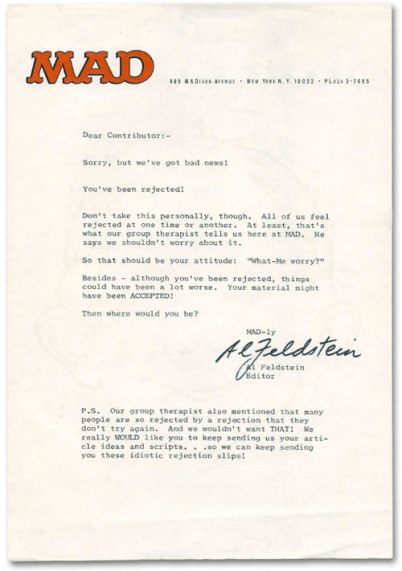 All these books were rejected by agents/publishers who now hate themselves.

1 thought on “I Love Rejection”