Welcome to episode 20 of Messin’ with Mark! For those of you who are unfamiliar with this series, let me tell you how it started . . .

When I was very young, Jesus was walking around in His heavenly area up there when he saw his Dad looking down through the clouds, laughing His head off. Curious, he walked over and asked, “What’s up, Pop?”

“Again?” Jesus asked, “Why are You always picking on him?”

“I don’t know. There’s just something about him,” God said. “I mean, look at his face right now.”

Jesus looked down and started to chuckle, then stopped Himself. “Okay, I admit it’s kind of funny, but this is wrong. I mean, You created him. With all due respect, what kind of an example are you setting for the angels? We’re supposed to love and protect humanity, not single one out from all the rest for humiliation.”

God thought for a moment, then looked at Jesus and said, “You’re right. I should stop.” They looked at each other seriously, then said, “Naaaaaaaahhh” and laughed some more.

Jesus suggested that he make a regular show of his pranks on me. They named it Messin’ with Mark.

Remember Rodney Dangerfield’s bit about getting “no respect” from humans? It’s kind of like that, but on a cosmic level.

So, to today’s episode – The Sting. 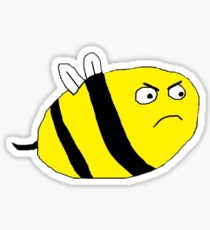 As you will see, dear reader, that title has a double-meaning. It was a sting operation by God and I also got my butt stung off by bees. Allow me to explain . . .

I got a wild hair one weekend and decided to go rock climbing. I didn’t want to drive far so I went to Griffith Park, which is a few miles from my house. I wouldn’t admit it then, but in retrospect I must admit I was a classic weekend warrior. Minimal rock climbing experience, no proper gear, not really in top shape for such activity, and no research ahead of time on the area where I’d be hiking. If I had known the mountain was called BEE ROCK (!), I probably would have chosen another one.

Here it is. Looks inviting enough, doesn’t it? 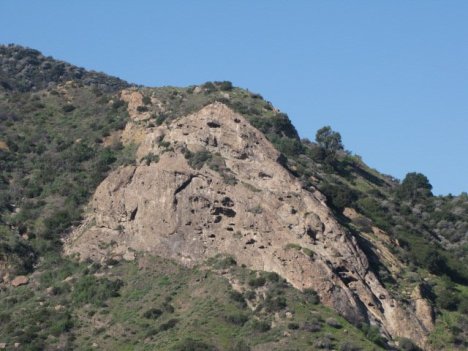 See that crevice at the bottom right? That’s where I started. I got to the top and was almost doing the splits with a seventy foot drop beneath me when it finally dawned on me that I had written a check my body couldn’t cash. It was also at that moment that I realized I was smack-dab in the middle of another episode of Messin’ with Mark, God’s sitcom!

As if I weren’t in enough trouble, bees started to sting me. Dozens of them. And I couldn’t run or hide. All I could do was stay there clinging to vertical rock faces on either side, hoping the bees would get bored.

They didn’t. They invited friends.

I realized I needed to get down or move over. There was only one crag within distance – jumping distance. I knew if I stayed there, the collective bee venom would paralyze me and I would fall to my untimely demise.

I can just imagine the control booth up in heaven at about this time, with Jesus looking at his Dad sideways, wondering if he was going to let up. Seeing He had no intention of cutting me any slack whatsoever, He had to say something.

GOD: So what? I’m God. I’ll just make another one.

JESUS: But this is a comedy. He’s the original actor. Sequels and look-alike’s never capture the original magic. Didn’t we learn anything from Home Alone 3 and 4?

GOD: Maybe you’re right. I’ll put a crag next to him, but far enough away so he has to make a death-defying jump from a splits position to reach it. Should be exciting!

JESUS: Okay, but please just make sure he makes it. Seeing him go splat would definitely be bad for ratings. I mean, humiliating him mercilessly over and over is great entertainment, but killing him outright is just mean. Nobody will tell you you’re a terrible director because you’re God and all, but they’ll be thinking it.

GOD: As if that helps. I know what they’re thinking, too.

JESUS: Dad, don’t get all Old Testament on me.

GOD: Okay, okay! I got the message.

So I jumped, caught it, and managed to crawl far enough up the mountain that the bees finally realized I wasn’t trying to steal their honey or whatever the hell it is bees get all uppity about.

Bees seem so cute from a distance, flying from flower to flower. The springtime innocence of it warms the very soul. Not so much when there’s 93,000 of them all intent on stinging every square millimeter of your personage. And they look a lot bigger when they’re actually on you, too.

I spent the next few days looking like the Stay-Puft Marshmallow Man, which I’m sure also fetched big laughs up in heaven.

As I lay there on the couch, slapping on the calamine lotion, I looked through the window to the big, blue sky and repeated those words I have said so many times before, usually in various states of emotional and/or physical trauma . . .