I do a lot of walking around my neighborhood in Burbank, California. It’s an old town so the sidewalks have a lot of etchings from bygone days. I started noticing them while walking my daughters in their stroller. After a while, I started photographing them. They interest me for the same reason I write – the “authors” of these etchings had one chance to write something meaningful in cement that was rapidly drying. I feel that way about my own writing most of the time. What am I going to say in this short life? What will my life mean when it’s over? Will I ever write anything socially redeeming enough to become “etched in stone.” Life is a lot like rapidly drying cement.

Here’s my collection so far. 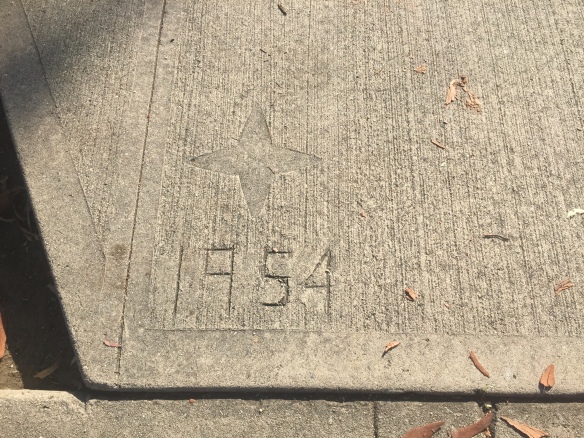 The four-pointed star symbol in Christianity, also known as the Star of Bethlehem or natal star, represents both Jesus’ birth and the purpose for which He was born. 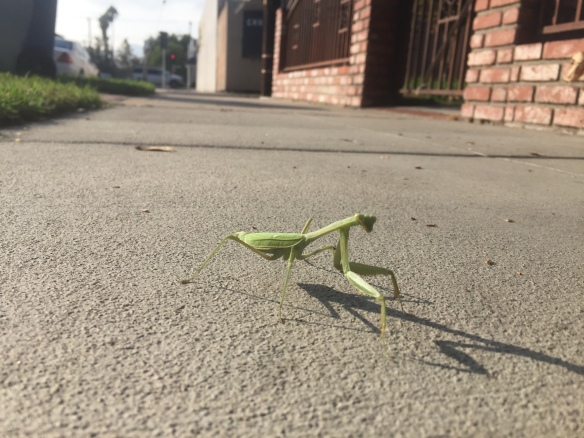 Friend made along the way. 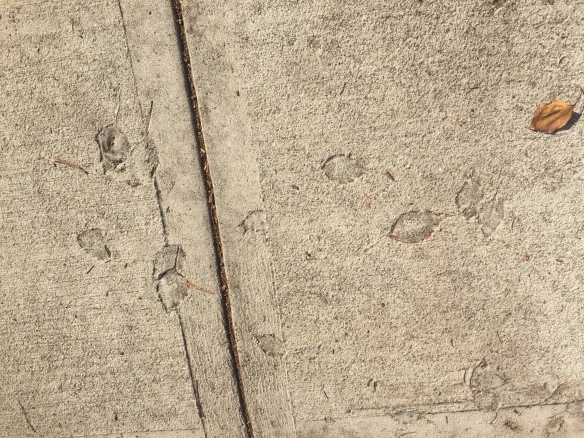 I have always wondered how something as light as leaves make impressions in cement, even when it’s wet. Explanations from scientists and/or physicists are welcome! 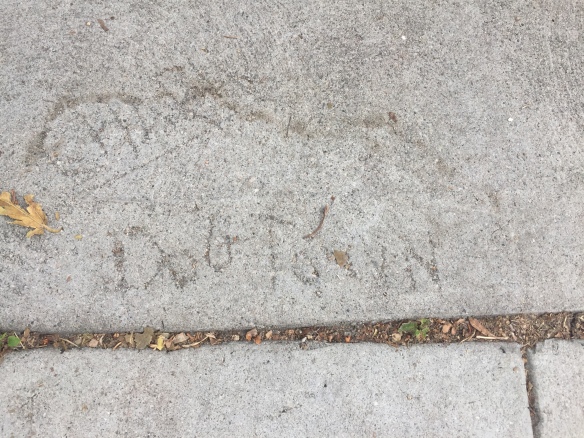 Dogtown was a popular skateboarding club back in the 1970’s. A movie called Dogtown and Z-Boys (or something like that) was made about them recently. 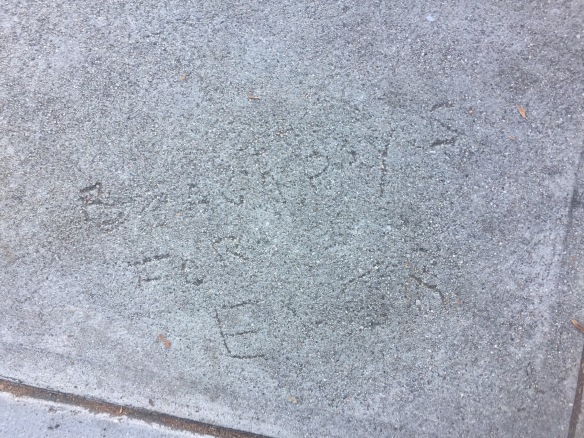 ” “Beach Boys Forever.” This could have been written anytime between 1965 and today. 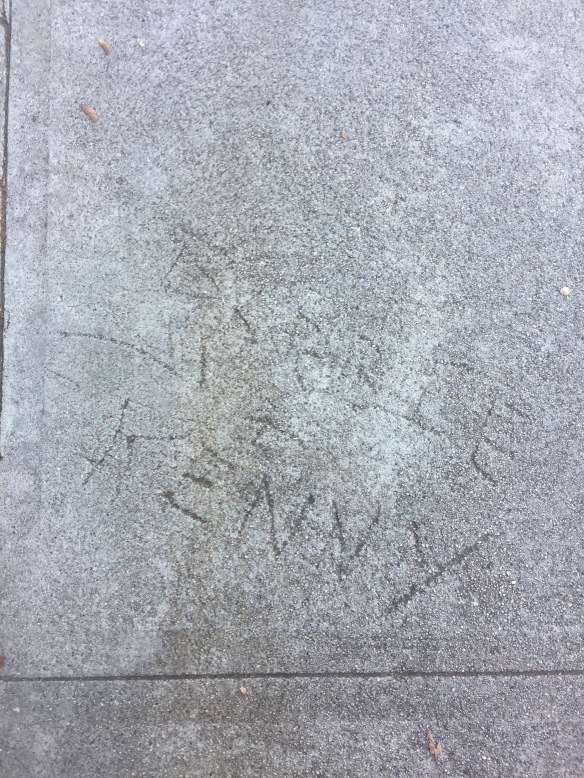 Love – always a good reason to vandalize cement. I hope Barbie and Kenny are still together. 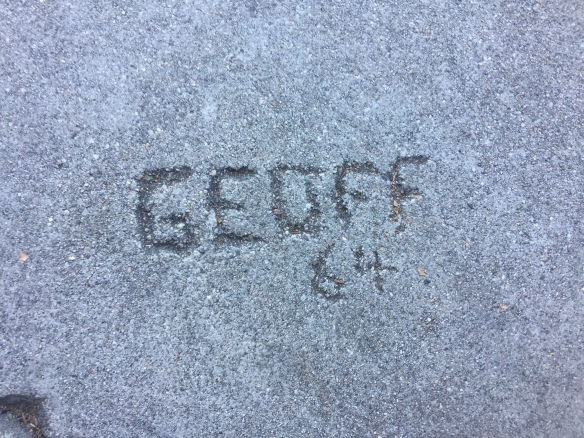 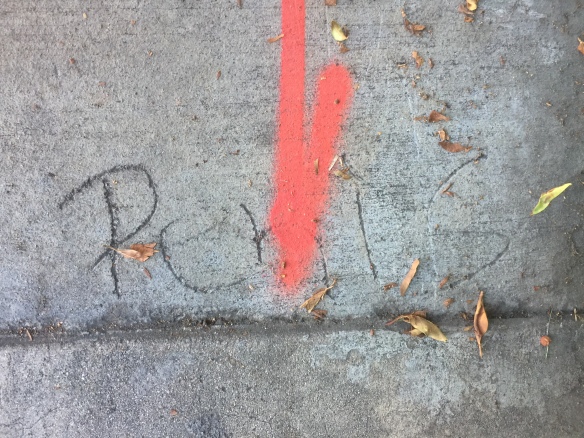 Here’s a guy who used his one chance at immortality in a slightly less mature manner. 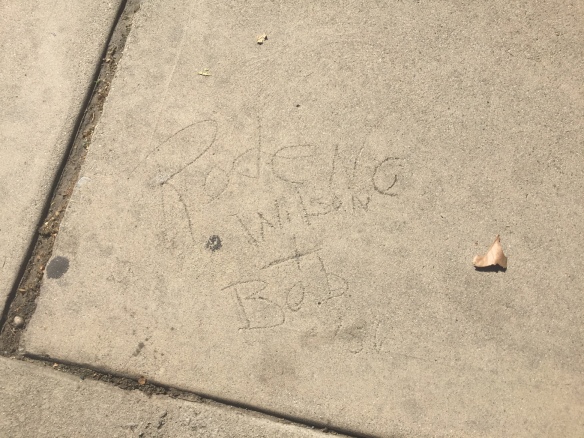 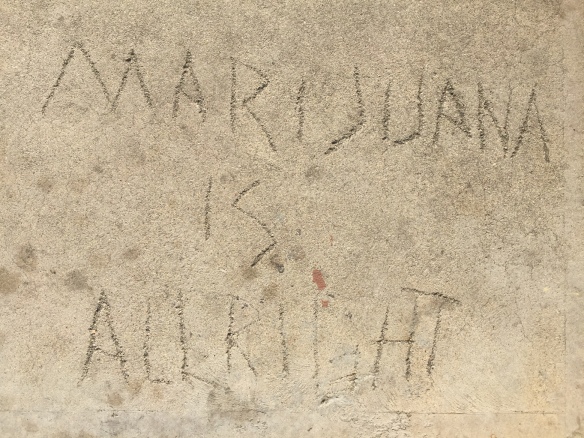 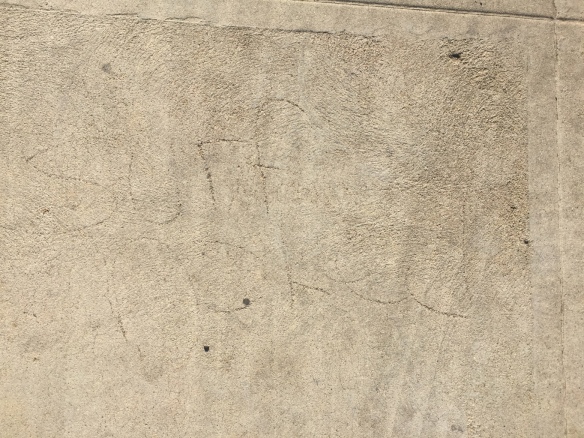 “Surf Naked” – a popular phrase from the 1970’s, and something every self-respecting Californian needs to do at least once. 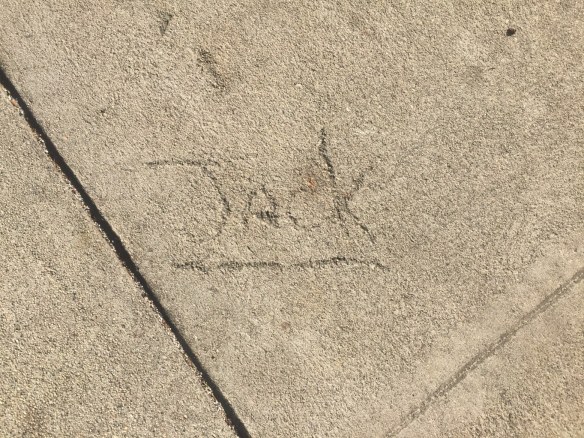 This one is as solid as the name Jack is. This particular Jack didn’t even bother putting his last name or initial. He’s Jack, dammit, and anybody who doesn’t know exactly which Jack he is can go straight to that hot place! 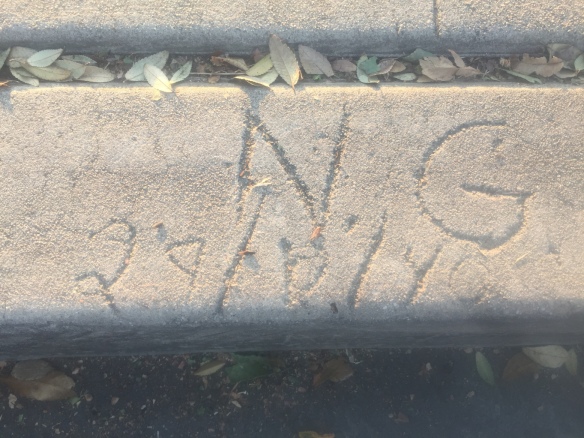 The winner for the oldest one I’ve found so far. 1940. And apparently written by a European who puts the day before the month. 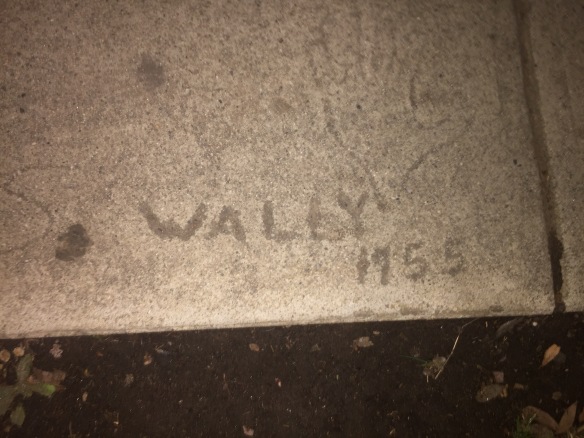 On the sidewalk bordering the park where my six-year old plays tee-ball. Was this Beaver’s (from Leave it to Beaver) brother, Wally? If I could travel back to any year in my hometown, 1955 would be it. See below for etchings by Wally’s friends that same day. 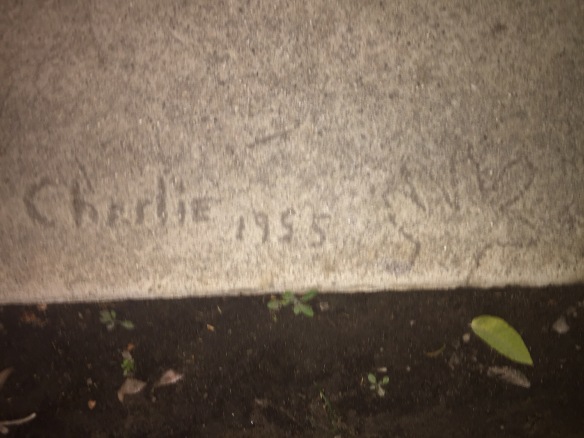 Wally’s buddy Charlie started his own Grauman’s Chinese Theater walk of fame with a handprint. 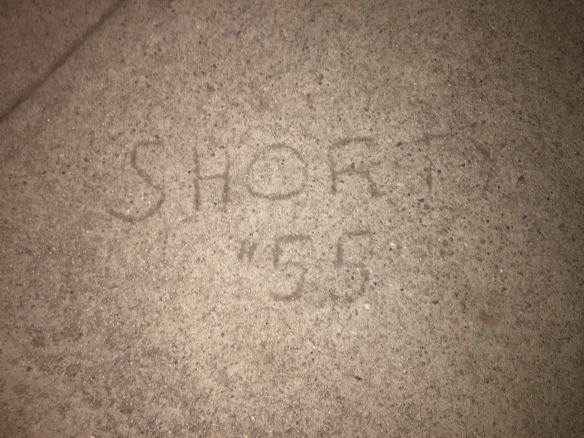 Shorty, a friend of Wally and Charlie, no doubt. I wonder where Shorty is now. He’d be in his 70’s or 80’s, but the name the boy he was carved in cement is still there, after 63 years. 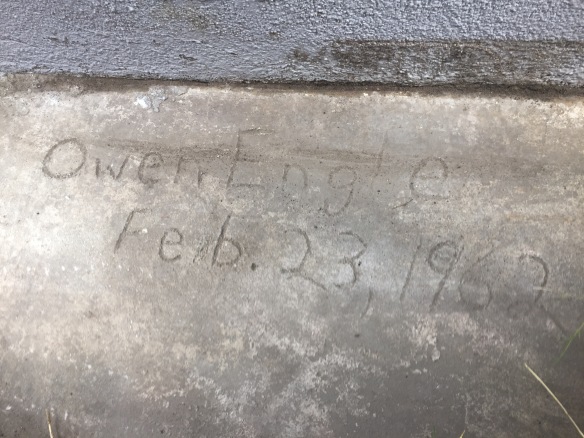 This one is in my own backyard. My house was once owned by Owen Engle, the original founder of the Burbank Road Kings, a hot rod club in the 50’s and 60’s. In fact, the steel girder beam they wedged between the walls of the garage to hang engine blocks on is still there. They cut all the rafter ties to get it in, which I had to rebuild to prevent the garage from falling over during an earthquake, but it’s still cool to own a part of Burbank Road Kings history. They were and still are a pretty big deal in classic car circles.

If you came across some wet cement today (and nobody was looking), what would you write? As Robin Williams’ character in Dead Poet’s Society said to his class, “The powerful play goes on and you may contribute a verse. What will your verse be?”