The following is one of the first poems I ever wrote, back in those voice-finding days when I still believed in writer’s block. A bit melodramatic but accurate, which is more than I can say about many of my poems from back then.

I had a conversation with an interesting fellow recently who said he was plagued by writer’s block and asked me what the cure was. I told him his belief in it was making it real. The world is full of interesting things to write about. All one needs to do is watch the news, talk to a neighbor, look out the window, sit in on a courtroom, read a newspaper (if you can find one), read a well-written book, or file through the thousands of memories each one of us has. With all this to draw from, how can anyone ever run out of stories?

This poem, when I wrote it, was about writer’s block, but what it was about more specifically was writing the things we know we must. The hard stuff most people spend their lives avoiding and burying. This is why authors and artists of any kind are celebrated, and should be – because they give freedom to the multitudes trapped within themselves, without the desire, ability, or perhaps the courage to excavate these emotions in themselves. As Ralph Waldo Emerson wrote, “In every work of genius, we recognize our own rejected thoughts.” 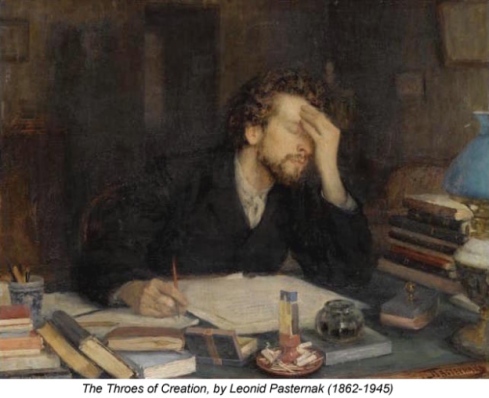 Words bound
through darkened corridors of my mind
like coy lovers daring me to catch them.
But I do not follow.
The darkness frightens me.
I do not follow.
I am safe in the light.
Safe from the worlds
they might open to me.
I accept myself, a fool,
until frustration with this half-life
erodes the empty shell of comfort,
forcing me to venture out,
to gape into the horrible blackness
I created
and groping, search
for what I really am
beneath the tortured, questioning facade
of awareness.

“Begin to write in the dumb, awkward way an animal cries out in pain, and there you will find your intelligence, your words, your voice.” (Writing Down the Bones, Natalie Goldberg)

So when someone tells me they’re plagued by writer’s block, I assume that a) they’re being artsy and playing writer, b) they’re looking for excuses not to write instead of reasons to write, and c) they’re not paying close enough attention to the great, big, wide, throbbing world, to humanity, which is always bursting with stories. The hard part is choosing which ones you will devote large portions of your life to. I tell those plagued by writer’s block to stop thinking about it and it will evaporate like the fantasy it is.