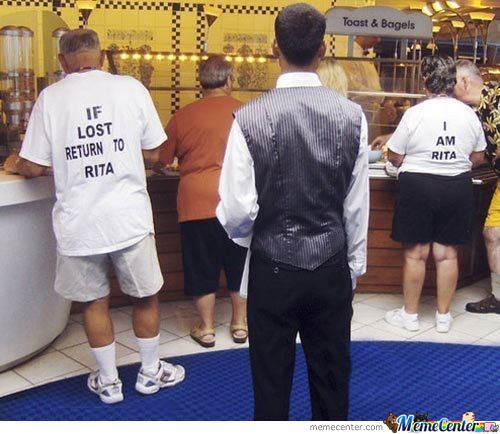 I was out walking with my daughters yesterday. An elderly couple nearby was walking in the same direction, but not side-by-side. The man was ten feet in front of her. A man standing in their path and holding a clipboard asked the husband if he would like to make a donation to some charity. The man abruptly said no. As they passed, the man said, “Okay. Well, have a great night. And by the way, there’s an angel walking behind you.” This was either a line he used all the time, or he intuitively knew a couple, especially an older couple, should walk together.

This was something my mother used to complain about when my dad was alive. He would always be blazing a trail, way up ahead of her. She would say, “Look at him. I could get mugged, abducted, or hit by a bus and he wouldn’t even know.”

Anyway, the old man’s response was, “What? Her? She’s no angel. That’s my warden.”

This could be perceived as a joke. There is often such playful banter between people who have been married a long time. Sometimes it’s just that – playful – but often, probably more often, it’s an indication of deep resentments. As Shakespeare wrote in King Lear, “Many a true word hath been spoken in jest.”

If his wife would have laughed, I would have thought their relationship was healthy and this was just another part of the act old folks develop. I’ve known old couples like this and their comedic repartee was so amazing, I suggested they should “take their show on the road.” This was not such a case. She was not smiling, and obviously embarrassed and saddened by his comment. He looked at me and smiled, expecting support from another male. He didn’t receive it. I now am at risk of having my membership with the men’s club permanently revoked.

You see, I can’t stand men, of any age, who treat their wives like they were somehow forced to get married, and treat their children as if they were also forced upon them. They courted the woman, they asked her to marry him, they had children with her, and yet somehow she becomes “the old ball and chain” as time passes, and the children are even resented for preventing the man from doing whatever it is he thinks he would be doing if he were alone. It’s the worst kind of victim mentality.

Sure, things can go a little sour. That’s life. But real men don’t whine, they adapt. They don’t verbally abuse, they stay or they leave. And if they stay, they don’t allow their character to become worse. They don’t blame the people they chose to be with, or the children they willingly created, for their own unhappiness. Of course, the truth is the flaw was there all along. It didn’t begin after the wedding.

This is especially pathetic with old people, like this man, who was grossly overweight, by the way. I mention his weight because my first thought after his comment about his wife was, “What would you be doing if you weren’t with her? Are women throwing themselves at you constantly, and you can’t act upon it because of your wife?”

Men are something else. Always imagining that life would be better if they were single. I didn’t get married until late in life, partly because of all the negative programming from married men who would say things to me like “enjoy your freedom while you can.”

Freedom. And what’s the opposite of freedom? Slavery and prison. That’s what I began to associate marriage with. Men are wolves, but to be happy, to find peace, we must become sheep. Not wimps. Soft. Sensitive. Loving. The lone wolf out in the wilderness may be romantic at twenty, but it’s pathetic after forty. Our hearts must soften, and if we let them, a wife and children are the best ways for this to happen.

The old man’s comment, “That’s no angel, that’s my warden” was true. He just had the roles reversed.