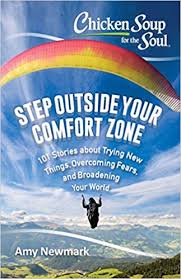 Here’s my story from Chicken Soup for the Soul’s latest book, Step Outside Your Comfort Zone. There are 100 more stories in the book about living life fearlessly and accomplishing your dreams. You can buy one online, in your favorite bookstore, or order a signed copy from me here through Paypal. (Message me for payment info, etc.) I hope my story inspires your next great adventure.

Another spring had arrived and, with it, my familiar and frustrated wanderlust. I had waited years for my friends to go to Europe with me, but there was always some reason they couldn’t. I proposed the trip once again to the same friends and received the same excuses. I wasn’t going to let another year go by without making this dream come true, so I decided to take the trip alone. I bought a one-way ticket to Copenhagen and told my friends I would send them a postcard.

On the day of my departure, I was excited but also surprised at how worried I felt—not just about being lonely, but also about the dangers I might encounter. My parents also questioned the wisdom of walking around Europe alone for months. They warned me not to be too trusting, to stay out of bad neighborhoods, and to avoid going out by myself at night. In retrospect, it was cruel to subject them to such torment, but they eventually understood that I just wanted to see the beauty of the world while I was still young.

My own worry was more difficult to assuage. Maybe I had watched too many movies that showed the darker side of man’s nature. Conflict is the essence of drama, after all. All those movies about naïve vacationers being attacked, kidnapped or thrown into abusive prisons had taken their toll on my trust in people. Watching the six o’clock bad news didn’t help, either. But there was no turning back, so I hugged my parents goodbye, got a ride to the airport from a friend, and flew into the big, blue sky and complete uncertainty.

It was early April, but snow was still on the ground in Copenhagen when I landed. Determined to be frugal, I chose the cheapest youth hostel in my travel guide. As I slept that first night on an ancient, unpleasant-smelling mattress beside a cracked, graffiti-covered wall, homesickness began to overwhelm me. I thought, What am I doing? I could be home in my clean, comfortable bed. But even that wasn’t there anymore because I had vacated my apartment and sold most of my belongings to finance this trip. I sat up, took out a miniature flashlight and found a note in my pocket that a friend back home had given me. He had written down the name and number of someone he knew in Copenhagen named Lisbeth. He said she would be happy to take me in for a few days. I decided to call her the next morning, and then fell asleep from exhaustion.

When I arrived at her door, she welcomed me like family and showed me the sights of Copenhagen for several days. I felt so accepted by her and her friends and had so much fun that I forgot to feel homesick.

One night, they took me to a karaoke bar. Word got around that I was from California, so someone asked me to sing a Beach Boys song. I chose “California Girls” but changed “California” to “Copenhagen.” The syllable count was a perfect match. The first time I sang “I wish they all could be Copenhagen girls,” everyone cheered, and I made a hundred friends instantly.

That’s another thing about movies. Nobody can sit in a bar in a movie without some group of drunken nincompoops harassing them. But this bar was filled with the nicest people imaginable. It was just another example of the skewed reality of cinema. Travel was working its magic. My faith in human beings was being restored.

I stayed in Copenhagen for a week before moving on. I was alone again, but invigorated by a great first week away from home. My solitude didn’t last long, however. I found travel companions everywhere I went, especially on the trains. My backpack was a silent invitation to other wayfarers to join forces and see something new together.

With only four thousand dollars, I didn’t know how long I would be able to travel. I ended up stretching it out for six months. When I wasn’t sleeping at youth hostels or the homes of new friends, I saved money by sleeping in train stations or on moving trains between one destination and another, roughing it for the sake of extending the adventure. Besides, with so many new people to get to know and so much world to see, sleep wasn’t much of a priority. It wasn’t just that, though. I wasn’t tired anymore. The continuous excitement of exploration freed me from the weariness that often plagued me at home.

While my friends back home repeated another typical summer, I awoke to the view of cotton clouds drifting through a pastel blue sky above Venice, Italy, as opera students practiced arias in the square below my hotel window. I dipped my feet in the cool water of the Trevi Fountain in Rome and imagined I had discovered the fountain of youth. I watched the sun rise over the red tile roofs of Florence. I held hands with a Parisian beauty at the top of the Eiffel Tower. I sat silently in the cool air of a mountainside prairie in Switzerland as spring exploded around me. I parasailed over Swiss Alps so fertile that the lake below them was bright yellow with floating pollen.

I watched a rainbow form over the Irish Sea. I held my hand against the cold monoliths of Stonehenge and felt their mystery flood through me. I read poetry by candlelight in a cave at the base of the mountain the Acropolis stands upon while colorful hot-air balloons filled the night sky in the distance. I recited a monologue under a full moon at the Theatre of Dionysus. I walked the ancient cobblestone streets of Athens. I danced all night in a Greek disco pulsating with life. I watched a golden sunfish sail past my rowboat in the Aegean Sea and imagined it was Zeus taking the shape of a fish to observe me more closely. I walked through ancient ruins and felt with an ache how brief my existence is, but how sacred and powerful it is for that same reason.

And through it all, I had time—that most precious commodity—to read, write, watch and really see, to listen and really hear, and to savor my life while gazing through the moving church of a train window. I discovered what Joseph Campbell meant when he said people aren’t as interested in the meaning of life as they are in the experience of being alive.

I arrived home with less than a dollar in my pocket, but with a heart and soul overflowing with riches and dozens of new stories to tell. Traveling alone can seem intimidating at first, but the world is full of kindness and generosity, and they are both showered upon us for prices anyone can afford—respect, friendliness, and an open heart.

I’m twenty-five years older now, and those same friends who didn’t come with me on that adventure can’t recall what was important enough to make them stay home back then. My problem these days is not fear of travel or distrust of humanity; it’s being content at home. The desire for adventure only grows stronger with age. How can one have enough fun? Romance? Awe? A world full of wonders, ever-pulsating outside my window, still calls me to new adventures, but now I accept the invitations fearlessly, knowing the rewards far outweigh the risks, and there is much more kindness in this world than danger.