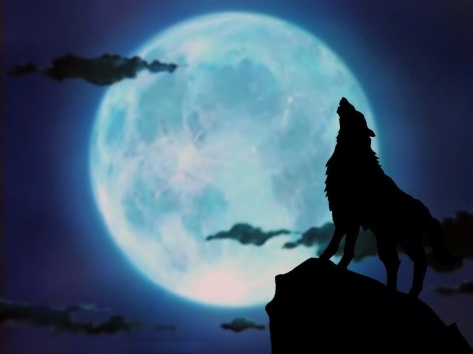 I found this old poem by accident yesterday, excavated from a tattered, 25-year old notebook, written during my single days. I’m happily-married now with two girls (4 and 7) so though the poem is sad, there was a happy ending to the story. My heart is full every day. I shudder to think where I would be if I had remained that Steppenwolf out there in the cold, circling the campfire.

I was twenty-one years old
alone in an all-night diner
after another bad date
with a woman who couldn’t love me
no matter how much I gave
or how hard I tried.

Looking back, I know now
that I was asking the impossible.
We can never be more than we are
no matter how badly
someone else wants us to be.

There are a billion and one moments
that make us who we are.
Who could ever sort them out,
let alone rearrange them?

She was older than me
and had been hurt before
She was broken
and I could not fix her.
She had folded in on herself
and I could not unfold her
but I wanted her so desperately,
I couldn’t stop trying.
I saw a paradise
that she couldn’t see.

So I kept returning,
like a colt to a trough
too cracked and beaten to hold water.

After enough nights like that one
and a very bad ending;
after the storm had cleared
and the debris was swept away,
I returned to myself
and it finally dawned on me
how uncomplicated love really is.

We know when someone really cares.
We even know if someone can’t love at all.
It’s built in.
But the heart and mind
have never been much for communication
and the depth of our loneliness
can be measured
by how much we make it not matter.

I understand her now.
Time has humbled me.
The world has destroyed my delusions.
I am more mature, safer.

But now, I am afraid
that I will never love as hard
as that kid
who sat alone in an all-night diner
tasting a new kind of pain
deeper than he’d ever known.

Now, the world has broken me, too. 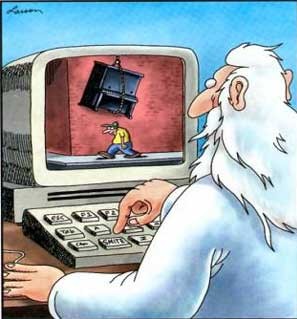 Welcome to episode 11 of Messin’ with Mark, God’s sitcom!

For those of you who are unfamiliar with this series, let me tell you how it started . . .

When I was very young, Jesus was walking around in His heavenly area up there when he saw his Dad looking down through the clouds, laughing His head off. Curious, he walked over and asked, “What’s up, Pop?”

“Again?” Jesus asked, “Why are You always picking on him?”

“I don’t know. There’s just something about him,” God said. “I mean, look at his face right now.”

Jesus looked down and started to chuckle, then stopped Himself. “Okay, I admit it’s kind of funny, but this is wrong. I mean, You created him. With all due respect, what kind of an example are you setting for the angels? We’re supposed to love and protect humanity, not single one out from all the rest for humiliation.”

God thought for a moment, then looked at Jesus and said, “You’re right. I should stop.” They looked at each other seriously, then said, “Naaaaaaaahhh” and laughed some more.

Jesus suggested that he make a regular show of his pranks on me. They named it Messin’ with Mark.

Remember Rodney Dangerfield’s bit about getting “no respect” from humans? It’s kind of like that, but on a cosmic level.

So, to today’s episode – my story from Chicken Soup for the Soul’s book, The Dating Game. Bizarre, but true! 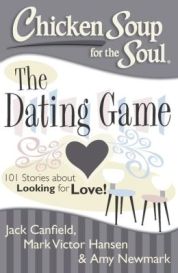 Apparently, I’m not the only one in God’s sitcom. Every now and then an unfortunate co-star is cast alongside me, as you will see in this episode of Messin’ with Mark titled . . . 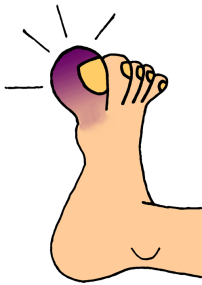 Humor is merely tragedy standing on its head with its pants torn. ~Irvin S. Cobb

I was always a realist when it came to love. I didn’t believe in destiny or the idea of soul mates. I considered it a lot of superstitious hooey. That is, until it happened to me… a date that went so horribly wrong, the only possible explanation was that our union was cursed.

When I first saw her, I was dumbstruck. She seemed to be my dream woman in every way. Everything she said and did was just so… wow. She could have worn a potato sack and it would have looked like high fashion to me. She could have read an insurance policy and I would have savored every word that poured from her sweet lips.

After ogling her with the glazed expression of a barn animal for a few weeks, I finally got up the nerve to ask her out on a date. I was ecstatic when she said yes. I walked home ten feet off the ground. 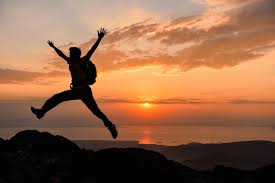 The first sign that something was amiss came when I called to confirm our date. She said she had severely stubbed her big toe and was thinking about canceling. It wasn’t broken, she said, but it had swollen to twice its normal size. My heart sank, thinking she had changed her mind and made up the toe injury as an excuse. However, when I said she would be sitting most of the night — in a car, restaurant, and theater — she agreed to keep our date.

Sure enough, when I came to pick her up, she was wearing open sandals and the big toe of her right foot was heavily bandaged. 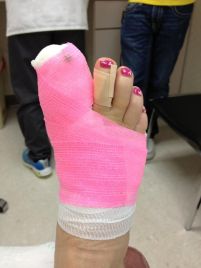 The first sign of the curse came about halfway into dinner. It was one of those restaurants with singing waiters. One broke into song so I lifted my chair to turn around, not noticing that my date had extended her leg under my chair to rest her toe. As I set down the heavy, wooden chair, one of the legs and all of my weight came down squarely on her injured big toe. She let out a yell that was louder than the singer’s amplified voice.

The other diners thought she was launching into a duet with the waiter. I apologized profusely, but she was in so much pain, she couldn’t respond. Eventually, she recovered and forgave me. After all, I couldn’t see her unnaturally outstretched leg under my chair. But I still felt like a putz.

After dinner, we drove to the theater. At least we would be safe there, I thought. No such luck. As the theater filled up, a large woman shimmying along our aisle to her seat stepped on the same toe with her heel. My date screamed for the second time that night. This was becoming downright mysterious. I was starting to think someone had a voodoo doll of her and was repeatedly stabbing the big toe with a pin. 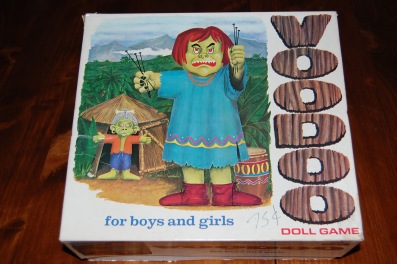 I didn’t think her toe could swell any more than it already had. I was wrong. When the lights came up in the theater and I got a good look at it, I almost screamed, too. It looked like something out of a cartoon. I suggested taking her to the emergency room. She refused, saying she hated hospitals. However, my growing concern must have struck some chord in her heart because she asked if we could go to my place. I had mentioned that there was a swimming pool at my apartment complex, and she thought submerging her toe in the water might make it feel better. I was glad she wanted to spend more time together despite the bumpy start we were having.

It was a warm, summer night and the front yard grass was still wet from sprinklers. She took off her sandals and walked across the cool grass.

“Ahh, that feels nice,” she said, finally feeling some relief from the pain. I was as relieved as she was until she kicked a sprinkler — yes, with the same big toe — and screamed in agony yet again. 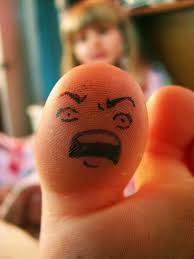 “Ah, come on!” I yelled to whatever force was calling down such misery on her unfortunate toe.

I picked her up and carried her to the pool. She sat on the edge, put both feet in the cool water and said, “I don’t usually drink, but I think a little alcohol might numb the pain a little.”

I told her I would bring her something.
“Make it a double,” she said.
We sat at the pool’s edge and gradually fell into lively conversation. She even forgot about her toe. Eventually, we moved to lounge chairs. After a few hours, I realized that I hadn’t let my dog Sparky out of the apartment all evening. I excused myself and went to get him. She saw me walking him to the grass and said, “Oh, he’s so cute! Bring him over here!”

Then the curse struck again. To my horror, Sparky, who had never bitten anyone before, walked directly over to her and chomped down on her bandaged toe. 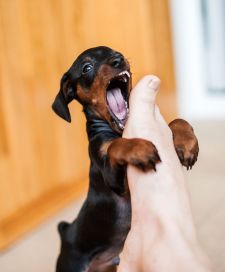 Maybe he smelled blood through the gauze and thought it was a sausage wrapped in butcher’s paper. She let out a blood-curdling scream for the fourth time that night, the kind of scream one might hear in a 1950s B-grade horror film.

The only break she got was that my dog was a small Terrier mix and not a Pit Bull.

Startled by her scream, Sparky took off and I ran after him, worried he might run into the street. By the time I caught him and returned, she was livid.

“Why didn’t you warn me your dog was so vicious?” she yelled.

I told her Sparky had never bitten anyone before but she did not find it comforting to know she was the first.

“Please just take me home,” she said. “I’ve had enough toe injuries for one night.” I couldn’t understand why she was insinuating that her now obvious toe curse was my fault. I mean, the chair leg, the clumsy movie patron and the sprinkler I could understand, but my little Sparky latching onto that particular toe, and with such cyborg-like commitment, was proof enough for me that she and I were in some sort of Twilight Zone episode. I half-expected Rod Serling to show up and start narrating it. 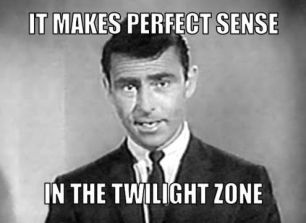 With a heavy heart, I drove her and her toe home. She stuck her foot out of the window to elevate it. I begged her to bring it back inside to prevent some other freak accident, like a vulture swooping down on it. After everything I had witnessed that night, anything was possible. 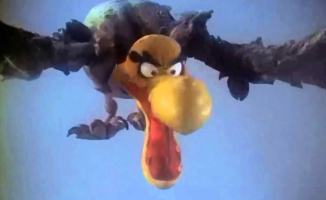 I left several messages for her in the following weeks but she didn’t return my calls. A month or so later, for a laugh, I sent her a pair of steel-toed boots to protect her cursed toe. She called to thank me and we made plans to go out again.

On our next date, she wore the boots for a laugh. It was a wonderful evening, a fresh start. When I took her home, she got out of the car – and slammed her thumb in the door. 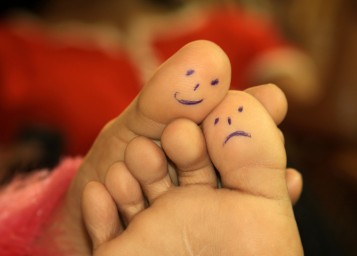 P.S. We’re still together, and she still stubs her toe all the time. She’s just a klutz.