People often say, “When you live in Los Angeles, you never know who you’ll bump into.” Well, I found that out quite literally (and the hard way) one day when I bumped – okay, crashed – into country singer and movie star Mac Davis.

For those of you too young or just unfortunate enough to not know who he is, this is him in his prime – 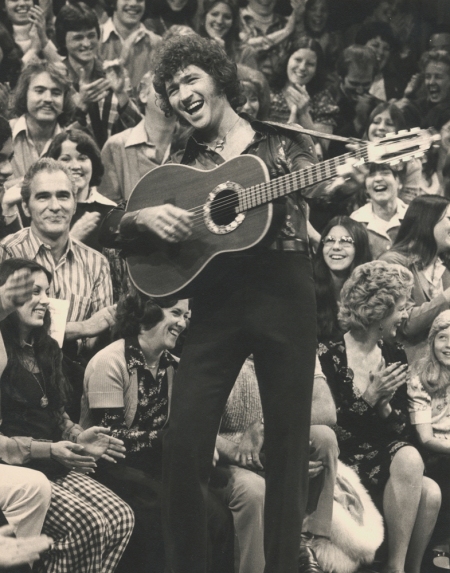 I used to watch The Mac Davis Show when I was a kid and was amazed and entranced by his many talents. He was a natural performer. Pure charm. The segment of his show I enjoyed the most was called “Audience Improvisations” when people would give him random song titles and he would write the song to go with it right on the spot. It was incredible to me and one of the things that made me want to be a writer. Here’s an example. Mac’s a bit older now but as sharp and talented as ever. You’ll see my favorite song title improv in this clip. It goes like this –

My girlfriend burned her bra today.
It really was a shame.
Cuz she ain’t exactly Dolly Parton.
That sucker hardly made a flame.

I was driving down Sepulveda Boulevard one day and had just crossed Wilshire going into Westwood when there was suddenly a stopped car in front of me. I went right under it and scooped it up onto my hood. I would find out later that the woman in front of Mac realized she had missed her on-ramp to the 405 freeway and slammed on her brakes. He was able to avoid rear-ending her but because I was glancing left and right in the intersection, I saw Mac’s rear bumper too late. Mac got out – actually, climbed down out of his car – and he was not happy. Because he was one of my heroes, I recognized him immediately. I apologized. He immediately relaxed and said in his Lubbock Texas accent, “It’s okay, kid. It wasn’t your fault.”

As we waited for the police to arrive, he told me a story about how he crashed a Cadillac (I think) he called his “In The Ghetto Car” because he bought it with the money he received after Elvis Presley recorded the song he wrote by the same name. Mac wrote a ton of hits in addition to that one – Baby, Don’t Get Hooked on Me, It’s Hard To Be Humble, Texas in My Rear-View Mirror, I Believe in Music, etc. He told me he was going to star in a Disney Christmas special at Disneyland the next day and said, “I’ll wave to you.” A pretty damn cool thing to say to someone who just wrecked his rear bumper.

I tell this story for many reasons – to show that not all celebrities are jerks, particularly those as seasoned as Mac, and those who grew up in Texas, not L.A. Mac is old school not just in terms of writing songs that actually make sense, have a clear beat, and are impossible not to like, but in terms of intelligence, class and charm, too. I was nobody to him. He didn’t say, “Hey, you’re that guy who wrote twenty stories for Chicken Soup for the Soul, aren’t you?” Nobody recognizes writers. He could have easily been unfriendly to me but he wasn’t. In fact, quite the opposite. He smiled and waved at me from Disneyland. Mac Davis is country, in every sense of the word.

So if you ever read this, Mac, thank you for your kindness, especially to someone who messed up your car. It’s easy to be nice when everything is going right, but one’s true character is revealed when things go wrong. You certainly passed that test. I hope to bump into you again someday – when we’re not driving.